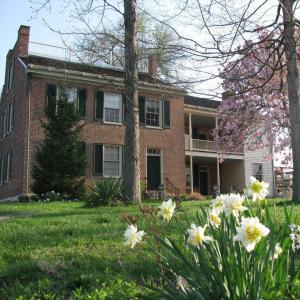 How many places have you driven by over and over again and never stopped to check out? We are guilty as charged and that stops now! Well, at least for this episode. We talk with (and Karan reunites with an old college friend) Carey Champion who is the executive director of the Wylie House. You know the house I’m talking about. The beautiful and stately home on Second Street? It’s got stories, possible ghosts, and important history to both Bloomington and IU. And it’s free to tour. Listen to learn more about this local landmark that you know you’ve driven by a million times and never stopped.

Also, we throw back to At Home in Bloomington Episode 11 with the Mathers Museum. Another free museum opportunity (with FREE parking) that is available to the public, bringing town and gown together. And in our REAL-list segment, we talk about the new Co-Housing movement that is being built right here in Bloomington! What is co-housing? It’s not a commune or a place for extroverts. It’s a lot more!