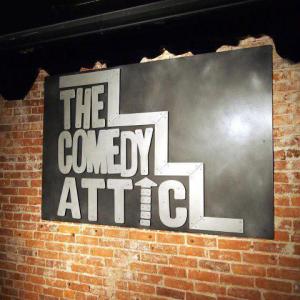 While Deb’s apparent resemblance to Amy Schumer (at least according to the random lady in the grocery store and Ed Schwartzman) doesn’t make her funny, Deb and Amy do share a love for the Comedy Attic. In fact, Amy Schumer named the Comedy Attic one of the top 10 comedy clubs in the nation. And Deb agrees. The business of making people laugh isn’t easy, but over the last 10 years, Jared & Dayna Thompson have built a Midwestern comedy mecca for fans and comedians alike. Not only does the Comedy Attic book some of the top names in comedy, they’ve helped their fair share of local comedians hone their chops. Community is also important to them. So much so, that they donate the proceeds from their yearly anniversary show and have raised over $45,000 for local charities over the last ten years! With six professional shows and an open mic weekly, there are plenty of chances to laugh loud and enjoy one of the best comedy clubs in the United States, right here in downtown Bloomington.

In our Facebook Follow segment we encourage listeners to be a part of the Bloomington food truck scene by following Top Shotta Jerk Chicken and Cuisine. A sweet story and a spicy (not too spicy) chicken. Can’t get any better than that! And in our REAL-List segment, debunks a popular myth about mortgages – that you should avoid lenders who sell your mortgage after closing.

Originally from Kill Devil Hills, North Carolina, Jared Thompson moved to Bloomington in 2003 with his future wife, Dayna. They opened the Comedy Attic in 2008. Not long after, the couple welcomed their son Max into the world, followed by their daughter Margaret a few years later. Jared is a lifelong IU fan, but nothing (outside his love for his children) tops his love for the Chicago Cubs, even if it causes him severe emotional distress.