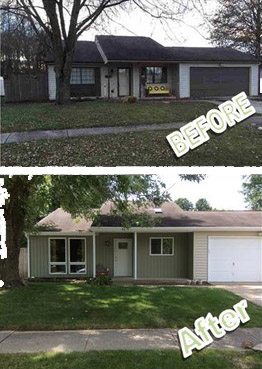 Last week, three different clients sent me pictures of work they had done to their new houses. One remodel was so astounding (see pic above) that I had to visit in person. I also stumbled upon a cool online article I want to share.

The article is from the “This Old House” website and was entitled “64 numbers every homeowner should know”. I have included some of those numbers in this month’s REAL List column, but I have to admit that I was kind of obsessed with this article. Having been in so many houses over the past 9 years, I know that feeling when something is slightly off, but you can’t exactly put your finger on it. You know, like something is just a tiny bit awkward? Like the light switch that isn’t where your instincts tell you it should be. Or when my poor 6’4″ buyer has to run the gauntlet of the ceiling fans of death to get through a room with really low ceilings and even lower ceiling fans (that happened last week, too). Or that one step that isn’t the same height as the rest of the steps and causes you to stumble because the step tread isn’t where your body expects it to be.

Some say these quirks make the house charming. (I do agree to an extent. My 100 year old house has settled and there’s a dip in the upstairs that always makes me sway and think for a second I’m drunk.) But too many of these quirks make a house uncomfortable and awkward. And many of these quirks come from remodeling and stepping away from the normal conventions of architecture and design. We often call this “remuddling” as opposed to remodeling (clever, aren’t we?). And so, I strongly encourage you to embark on your remodeling projects armed with the understanding of what is the norm, pay close attention the details and call a professional when in doubt. For now, it’s hat’s off to Elyse, Stephen, Penny and Anjanette! You all have done a marvelous job! Anyone else out there with remodels to share?