Though most of you know that I’m a homebody and don’t go out much (except to show houses), I have been out to see Rough Draft and it’s always a blast. And inspiring to see this group put a dream together, work unbelievably hard at it and succeed! See you at a show this summer! – Deb 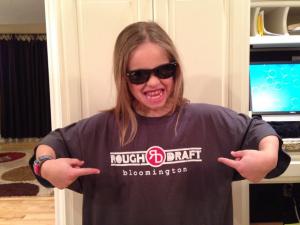 What started out as 3 friends wanting to learn a few songs for a pool party evolved into a plan hatched by some teachers while chaperoning the 2013 Bloomington South Prom.

The plan? To learn a handful of songs to play at the school fundraiser for Riley Children’s Hospital (Bloomington South Dance Marathon) the following year. They hoped to learn a few songs for the event because they knew students would love seeing “the teacher band” perform. The idea grew to include playing a show at a local adult venue and donating all proceeds to the Dance Marathon. In April 2014, the band packed The Player’s Pub to capacity just 10 minutes into the show. A line to get in ran down the sidewalk. The show raised more than $2,500 for the Bloomington South Dance Marathon. And the rest, as they say, is history!

For more information on show dates or to book the band, follow them on Facebook (Rough Draft).

Though the band started out as mostly teachers, half the band now comes from other walks of life. Since their initial performance they’ve played multiple shows for packed audiences at The Bluebird, The Players Pub and Bear’s Place and have been booked for private events at the Bloomington Convention Center, The Taste of Bloomington, and several other venues. 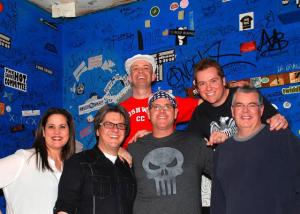 Fans of Rough Draft have recently been posting photos of themselves wearing Rough Draft shirts around the country so the band is definitely gaining popularity!

Catch them at one of their upcoming shows (see their Facebook page for more details):